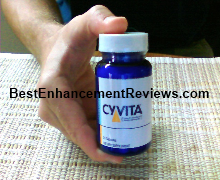 Late last night I was reading while the TV was on in the background, playing an informercial. Usually I dont stop reading for such things, but because I am so intimately involved in the male enhancement industry, this one caught my attention. It was for a product called Cyvita, which is an all natural supplement designed to help you last longer in bed. They offered a free trial of the product, so in the name of science and for my visitors, I decided to order the trial package and try it out.

At first glance, Cyvita almost looks the part of a typical pharmaceutical drug. It has a fancy sounding name for the “active ingredient”, called Proplonyl L-Carnitine and Acetyl L-Carnitine. While the label clearly looks like a pharmaceutical ingredient, these two ingredients are just amino acids. In fact, the entire product is just an all natural herbal enhancer, designed to act as an aphrodisiac, putting you in the mood for sex.

Manufactured in the US, Cyvita apparently boosts mitochondrial energy levels, and is supposed to help increase both your performance and stamina. The manufacturer claimed that Cyvita is supposed to boost nitric oxide levels in the bloodstream, but it doesn’t appear to contain a key ingredient that does this, l-arginine.

Cyvita appears to work very similar to other products in the testosterone replacement category, such as M Drive, Maca Man, and SizeCore.

According to the label, you can take up to 6 tablets of Cyvita daily, spread out throughout the day after meals. Some have reported that they experienced increased erections all day long, so you may be better off starting off with a low dosage to see how your body responds.

It really seems to be more of a testosterone supplement rather than anything else, but boosting testosterone will definetly give an enhanced libido for men.

First of all, here is the latest Cyvita informercial being broadcast on late night TV.

Now, I do want to mention that several times they cite that the key ingredients in Cyvita have been proven in two separate clinical studies outperformed testosterone treatments, and men performed longer, stronger, and with more frequent erections.

We actually researched this study, which was published in the Medical Journal of Adult Urology, and it did show some promise. While it wasn’t easy to find out which article it was, we noticed in their informercial that the title of the article was “Carnitine (the active ingredient in Cyvita) versus androgen (testosterone therapy) administration in the treatment of sexual dysfunction, depressed mood, and fatigue associated with male aging.” This was originally studied by a team of doctors in Bologna, Italy, and involved 120 participants that were either given Carnitine, Testosterone therapy, or a placebo. source: http://www.ncbi.nlm.nih.gov/pubmed/15072869

We can see why the manufacturer of Cyvita didn’t cite the article, mainly because it is laced with tons of medical terminology that most people don’t know. But, the general gist of the study mentions these key benefits from taking Carnitine:

My Results From Taking Cyvita

Cyvita is a slow acting male enhancement supplement, which means it is designed to be taken everyday. I followed the instructions on the label, which state to take 3 capsules twice a day on an empty stomach. There were 2 bottle in my order, each one containing 7 servings of Cyvita.

I noticed a difference after the first week of taking Cyvita, but not in the way a traditional enhancement product works. I felt more invigorated, kind of like I was turbo charged or something. It was almost as if I had drunk 6 Red Bulls throughout the day, I just did not get tired.

I’m not sure if I liked the feeling I got off of it or not, but I did see an increase my sexual energy as well. The one thing I did want to note was that I didn’t see an increase in blood flow. I don’t know if this was a result of not taking it for more than a couple of weeks or what, but there was no change in my size at all.

One thing I did not particularly like about Cyvita was that it was not shipped discreetly. The label is clearly marked as Cyvita, but it’s not that big of a deal because it is advertised as more of a performance boosting supplement more than anything else.

One of the best ways to find honest reviews of practically any male enhancement product, such as Cyvita, is to search on google and click on the discussions tab. We did exactly that, and found a couple of forums that were talking about the product. Although it doesn’t seem like many people have gotten a chance to try the product, there was one person that mentioned he had used it.

He had said that it actually worked too well for him, and thay he had to cut his dosage down to about half. We will be receiving our free trial of cyvita shortly, and will report back with our results when we get a chance to use it.

Their are no reviews of Cyvita on their official website, as well as independent third party sites, as far as we can tell.

The only ingredients that appear in Cyvita are AcetylCarnitine and Glycine propionyl-L-Carnitine. AcetylCarnitine has actually been proven to increase male sperm motility, which essentially allows the sperm cells to move more freely, helping to make a man more fertile. An Florida Atlantic University study in 2009 also discovered that the use of priopionylCarnitine can actually help to increase your stamina dramatically.

It appears that the only way you can buy Cyvita is through their free trial program, which involves a negative option. What this essentially means is that you have 12 days to try the product after the day that it ships, and then at the end of the trial period, you will be billed $59.40 every 30 days, and shipped a new one month supply of the product.

Their product is guaranteed for 30 days, so if you use it for a couple of weeks and find out it is not right for you, you can simply send it back for a full refund, minus the shipping costs of course. The free trial price of Cyvita is $19.99, and you are basically sent a 2 week supply with free shipping.

We believe that based on the clinical research conducted concerning the use of Carnitine on sexual performance and stamina, as well as the fact that it is manufactured in the US, that Cyvita may indeed work. While we do not agree with the auto billing procedure Cyvita uses, the fact that they have a 30 day unconditional money back guarantee attached to the product shows that they are serious about helping men out.