In this business, I come across a lot of scams, but one in particular keeps grabbing my attention lately, so I figured it was time to inform my readers once and for all in the hope that no more of you get taken in. I’m talking about the bodybuilding supplement stack – Hyper Tone Force and Hyper Tone Excel.

It all starts with a phony ESPN article claiming that some superstar athlete is in trouble for using this exclusive new stack. Hyper Tone Force and Hyper Tone Excel have used Rio Olympic Gold Medalist Wayde Van Niekerk in the past. Most recently, it’s UFC champion Conor McGregor. 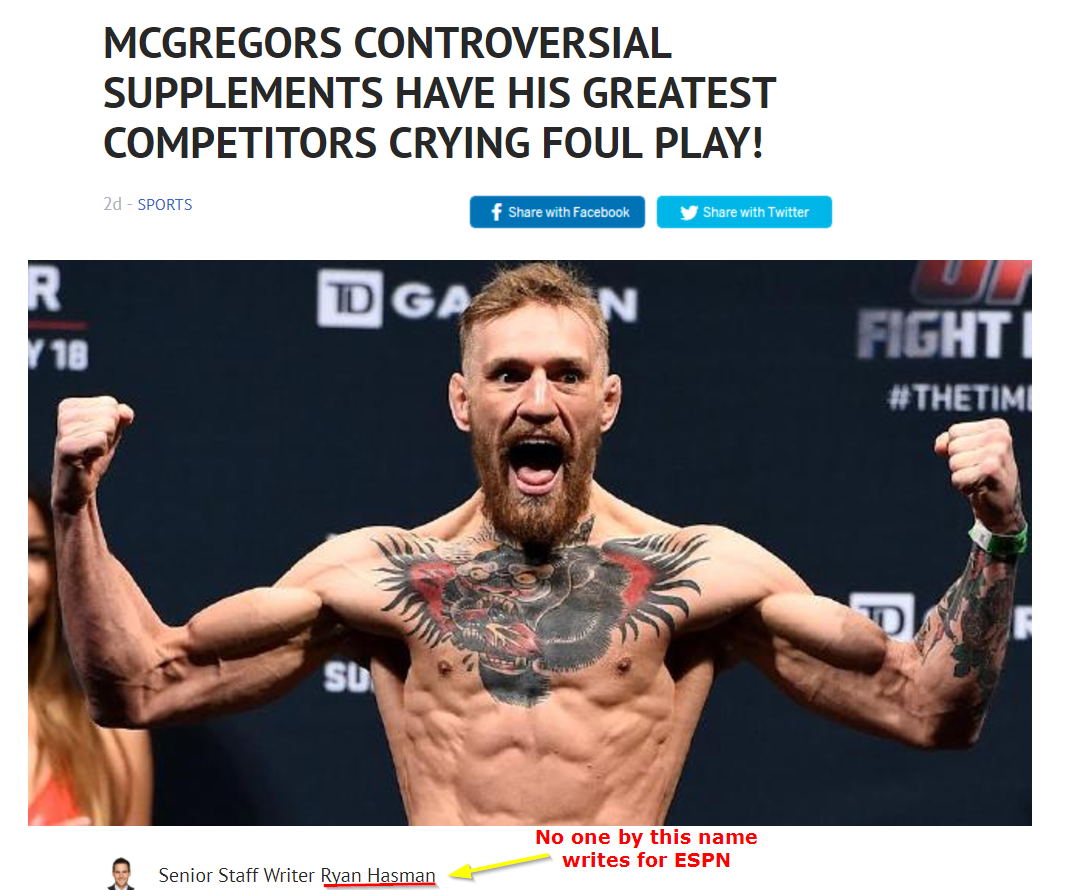 You may be wondering how we know this article is a fake. It’s a completely valid question. “Why should I believe you?” Well, there’s clear evidence, and here it is:

Last I checked “beautyfourall.com” was not ESPN and my research found that there is no relationship between this URL and ESPN or any of its affiliations. This is simply a website that copied ESPN graphics and language, attempting to make you and everyone else think they are actually representing ESPN.com.

Will the Real Ryan Hasman Please Stand Up

If this isn’t enough to convince you, let’s talk about the writer of the article, Ryan Hasman. Later on in his story, he talks about his personal results with the Hyper Tone Force and Hyper Tone Excel stack. He even provides before and after photos: 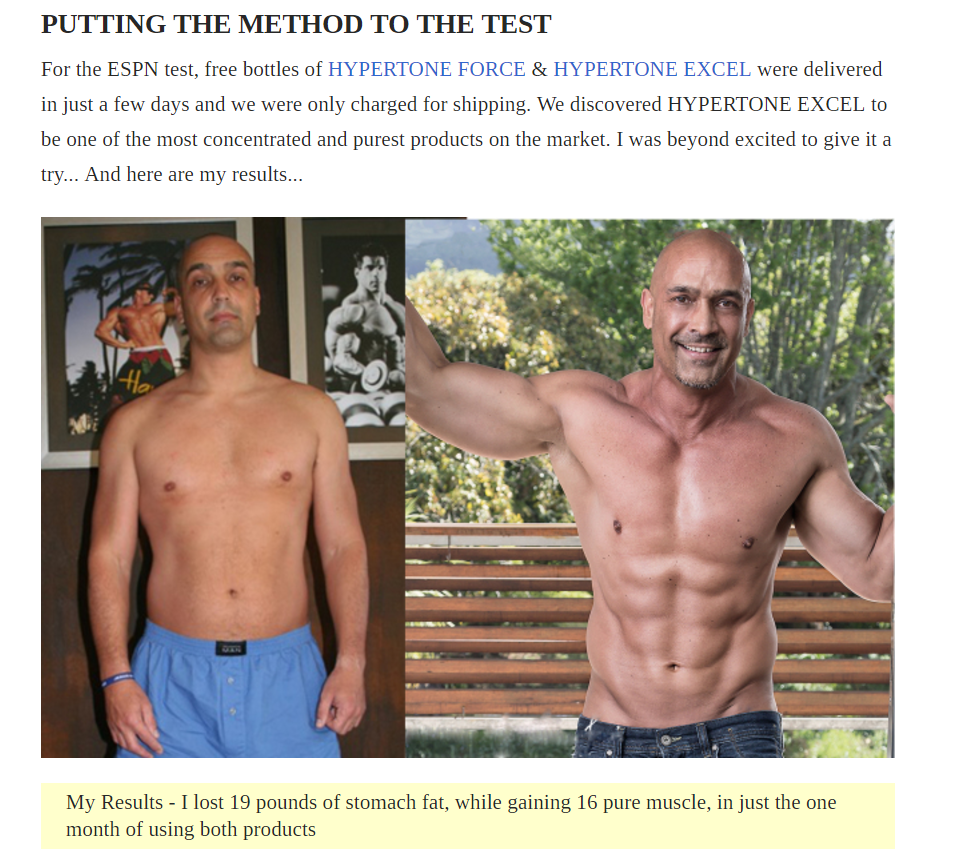 But what you may not know is that Ryan Hasman has “written” this same article about dozens of other muscle building stacks, and here are the before and after pics he published showing his results using the two products -Test Boost Elite and Max Nitric Oxide” 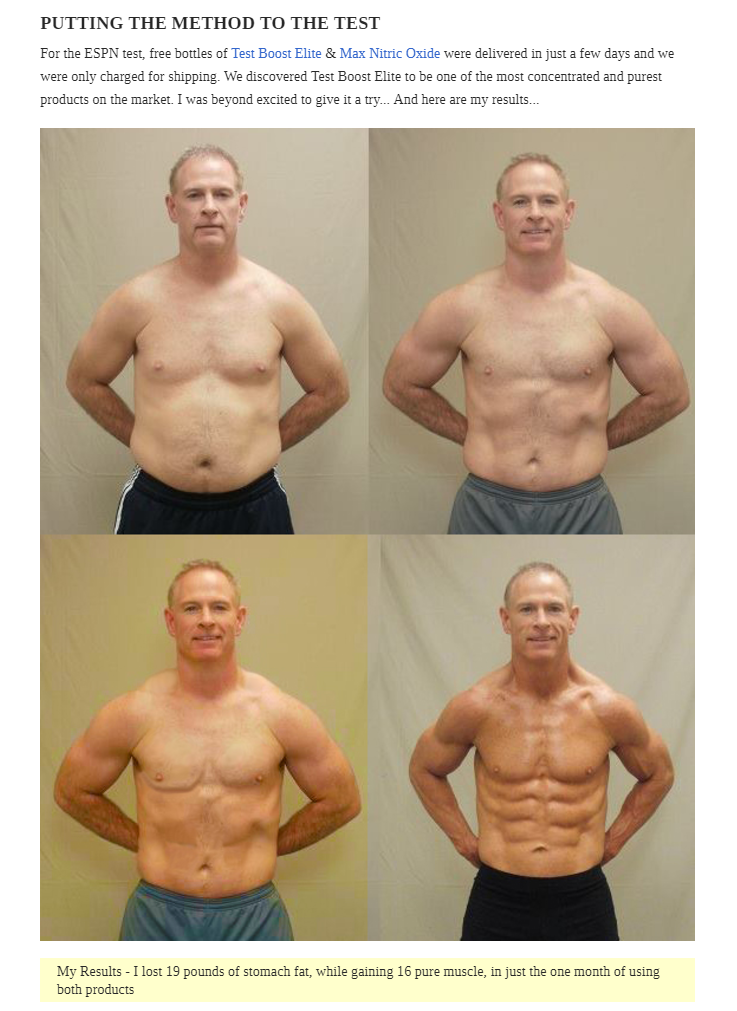 Notice that all the text is the same, but the photos are clearly of different men. I’m not familiar with the second group of images, but the first I know for a fact is not Ryan Hasman. Those 2 photos are of a bodybuilding expert and blogger named Gert Louw.

This isn’t the first time his photos have been used without his permission to promote a product he has nothing to do with. It happens a lot actually. But he’ll be the first to tell you, hard work is what got him his body, and he has never taken Hyper Tone Force and Hyper Tone Excel, or any of the other stacks that use his image. Unless it’s on his personal/professional website, it’s not Gert Louw.

Down near the end of this phony article, you’ll find its real purpose. This is where they place links to where you get to try Hyper Tone Force and Hyper Tone Excel for free: 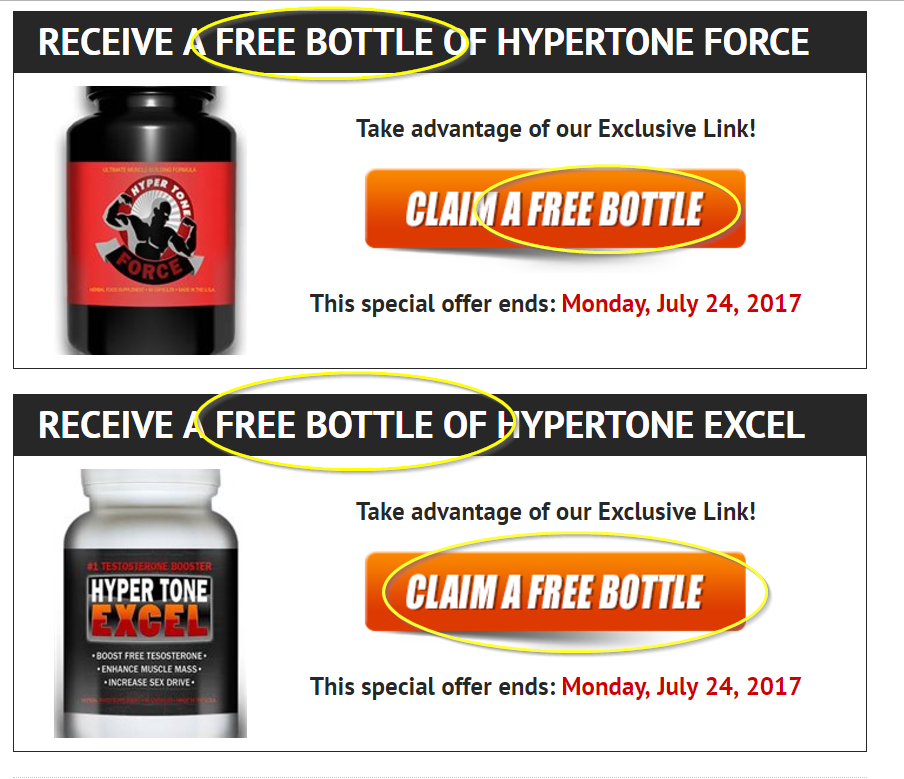 They use the phrase “FREE BOTTLE” 4 times, making it crystal clear that what you’d be linking to is a FREE BOTTLE of this stuff. Certainly, no one could blame you if believed you could sign up and get a free bottle. But the reality is you’d be very much mistaken.

We’ll get into that in more detail a little later on. For now, let’s talk about why you should or should not consider using Hyper Tone Force and Hyper Tone Excel.

Clearly, the marketing for this stack is sketchy to say the least. The fake ESPN article, the unauthorized use of Gert’s photos, and the dishonest“free” bottle offer are all reasons to hesitate before buying these products. But what about the actual products themselves? If they work, then who cares about shady marketing, right?

If you’re interested in knowing more about the individual products and how they may or may not work, read on.

Hyper Tone Force is the pre workout supplement in the stack. It puts most of its focus on boosting nitric oxide in your body, and it does this for a number of good reasons, namely to improve energy and endurance for your workouts.

Nitric Oxide is what they call a vasodilator. It relaxes and opens up blood vessels so more blood can flow more freely throughout the body. What this means for workouts is actually several benefits:

This is why so many pre workout supplements are nitric oxide based. It’s got proven benefits agreed upon by the bodybuilding community pretty universally.

So that’s how Hyper Tone Force is supposed to work, but let’s take a look at the formula to see if it really does.

There are two main ingredients that Hyper Tone Force calls the backbone of the formula:

It’s important to note that although we’re told that these are the primary active ingredients in Hyper Tone Force, we’re not told how much of each is used in the formula. Like we mentioned above, L-arginine is extremely common in pre workout pills and powders, but what’s also extremely common is under-dosing.

The recommended daily dose for nitric oxide boosting pre workouts is between 3 and 5 grams, but it’s actually very rare to find supplements using that much. They’re out there, but they are not the majority. And you can be sure that if a supplement uses the recommended doses, they make sure you know. Hyper Tone Force doesn’t do that. They just simply don’t discuss amounts.

Hyperone Excel is the testosterone boosting component of the stack. The idea is solid. Boosting testosterone will most certainly improve many aspects of your workout as well as your life in general. Among the benefits, you’ll find:

Even if you’re not starting a new workout regimen, boosting testosterone can be a great idea if you’re over say 35 or so. This is when you probably start to notice a decline in your natural levels. When you were a teen, you r body was practically flooded with the male sex hormone. It’s what made you grow, become sexual, gain muscle mass, and basically become a man.

But after about 20 or so, your levels begin to drop off. You don’t notice at first because they’re still quite high. But at some point, levels reach a point where you just don’t feel like your old self anymore. You have less energy, you’re less motivated, you’re less interested in sex, and you start putting on weight.

So clearly if you’re also at this point wanting to start a healthy eating and workout routine and yield some noticeable results, you’ll want to add a testosterone booster to your list of daily supplements.

But with that established, does Hyper Tone Excel have what it takes to make the difference?

As with Hyper Tone Force, we know most of the ingredients in the formula, but not how much is used. The list includes:

With the exception of the Monkey’s Head, most of the above ingredients are very typically found in your average run of the mill testosterone boosters. Nothing earth shattering, but decent nevertheless. Some of the more powerful components like DHEA and D-Aspartic Acid are missing, but all in all the list is pretty fair.

Again though, just like with Hyper Tone Force, Hyper Tone Excel doesn’t reveal how much of each ingredient is in the formula, which makes it tough to really assess how well you can expect it to work.

Our general assessment of the two Hyper Tone products is that they are pretty mediocre. I wouldn’t be surprised if you got some small benefit from using one or both of them, so if you come across them at a nice low price, you might want to give them a try.

But that’s not gonna happen!

The only way you can buy these two products is by signing up for their “free trials” but I would STRONGLY advise that you don’t.

Here’s how it works:

If you look hard enough, you’ll see they do explain the terms of the deal, but they’re very hard to find. Here’s what they say:

Almost everyone is caught off guard by these charges. They signed up for a free trial, not a $230 trial. And it only gets worse. A lot of guys accept it and blame themselves for not reading the fine print and chalk it up to a lesson learned.

But it’s not over yet! 30 days later, they get another $230 charge and another 2 bottles show up on their doorstep. You see, also included in the trial is enrollment in their automatic monthly refill program.

So unless you proactively contact this company and cancel future orders, these billings will go on indefinitely. And remember, this is $230 a month for 2 pills that are arguably only mildly effective at best.

Not only that, but I’ve seen a whole lot of feedback from customers claiming to have a great deal of difficulty trying to cancel the scam once it’s started:

I would caution you to always take an active role in protecting yourself against internet and other retail scams. But some are way worse than others. Clearly Hyper Tone Force and Hyper Tone Excel are two of the worst. They rope you in with lies about athletes and celebrities “getting in trouble” for using their products. They use unauthorized photos of real bodybuilders who have and want nothing to do with them. Then when they’ve got you just interested enough to try them for free, they slap you with huge recurring monthly charges.

Hyper Tone Force and Hyper Tone Excel would have to be pretty amazing in order to overcome all these negatives, but the real truth is, they’re absolutely nothing special. Avoid these two like the plague. We’ve got nothing positive to say about them.