Epic Male Enhancement Review – Is It a Scam?

It’s a perfect product name, isn’t it? “Epic Male Enhancement”. It’s catchy. It gets right to the point of what it does, and it sounds, well, epic.

But we care about more than just the supplement name. Whether or not it works is what’s really important. So we dug deep, did our homework, and found out the truth about Epic Male Enhancement – the good and the bad. 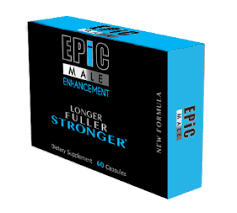 What is Epic Male Enhancement?

Ultimately, it’s a male sexual performance enhancement supplement that you take every day to improve your erections, your libido, and your staying power. But how you or any potential customer sees Epic Male Enhancement depends an whole lot on where he was introduced to it.

I had heard about it from a reader, and when I first started to gather information, one of the first webpages that came up in my search was an NSFW site with some very graphic pictures showing hot girls admiring, ogling, and being slapped by huge penises that have supposedly been transformed by Epic Male Enhancement, and in a crazy small amount of time. Here’s just one slightly cleaned up version of one of the tantalizing images on the webpage: 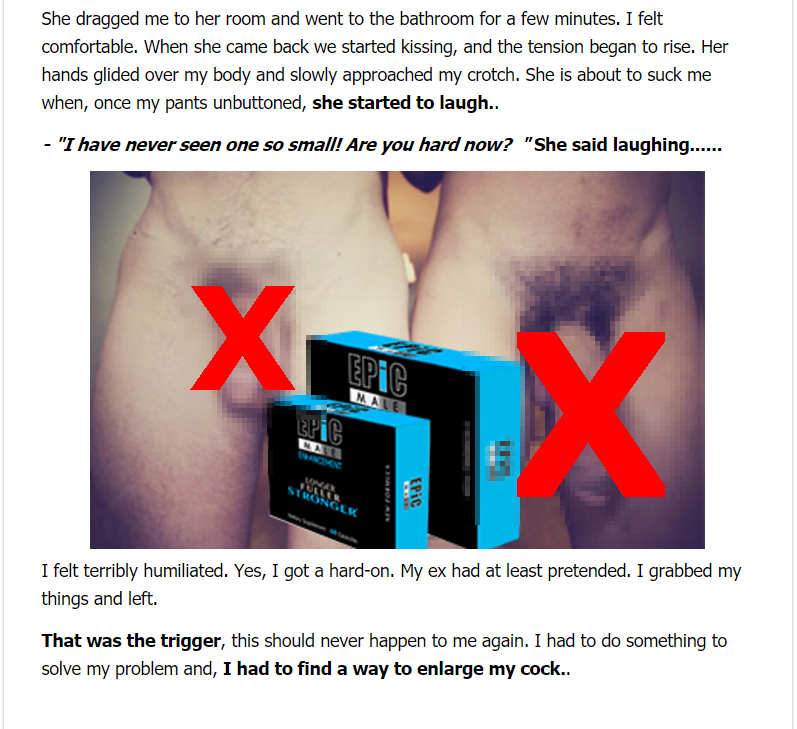 If you’re interested, the guy in this blog tells a story about how he was completely humiliated one time when basically he was having sex with a girl and she laughed at his small cock. So he immediately went home and ordered himself some Epic Male Enhancement, grew like an inch or so in 8 days, called her up to try again, rubbed his hard on all over her on the dance floor so she could feel how huge he’d gotten, then just when she thought she’d been wrong about him, he said good bye and left her hanging.

Clearly if this is your first introduction to Epic Male Enhancement, you’re going to think it’s a penis enlargement pill. But wait a minute. Newsflash! There is no such thing. So if that’s what you’re thinking, don’t. Pills don’t make your body parts grow.

If it works, what Epic Male Enhancement can do is help you get more excited with aphrodisiacs, make your erections bigger and harder with blood flow enhancers, and help you last longer with energy and longevity increasers. So in a way, you’re bigger, but only temporarily, while you’re having sex. Not on an ongoing basis.

This is not a failure of Epic Male Enhancement. It’s just a simple fact that a pill cannot provide you with permanent size increases. Period.

If you saw one of these sites, you are probably on the right track as far as expectations for what it’s supposed to do. Many of these types of review sites accurately portray the benefits of Epic Male Enhancement. Okay, so what are they? 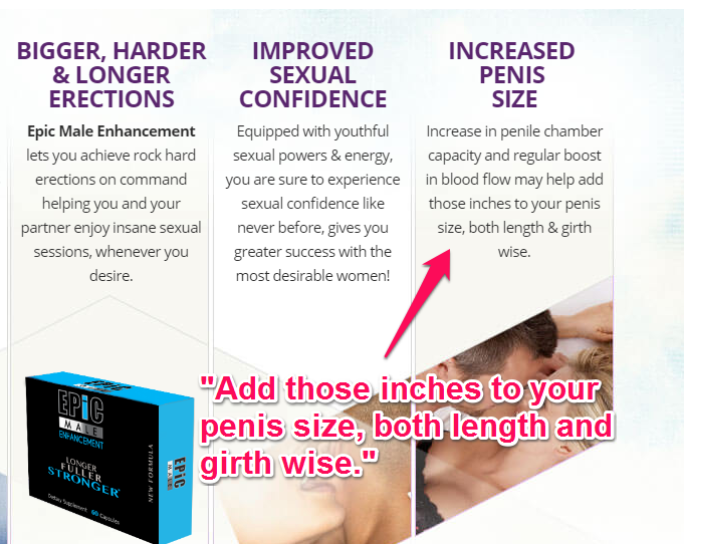 According to the Epic Male Enhancement website, the benefits you’ll achieve through everyday use of this stuff are”

All the confidence that comes along with increased size, better erections, and a higher libido.

Let’s Settle This Size Increase Thing Once and for All

The increased penis size claim is right there on the product website. Here’s how they explain it. Using Epic Male Enhancement increases blood flow to the penis during arousal, leading to bigger erections. When this happens over and over again over time, the penile chamber cavities actually expand, in readiness for more blood. This expansion is the growth they speak of.

But there is no evidence that increasing the amount of blood the cavity has to hold causes the cavity to grow. All we know for sure is that it expands temporarily, not that it produces tissue growth to increase capacity.

So if we’re being honest (which we always are, in spite of what some of the products say about themselves), we’re admitting that while Epic Male Enhancement might improve performance, it does not affect permanent size.

Now let’s check into whether or not it even improves performance. For that, we’ll need to study the formula.

Finding out just what’s in this supplement turned out to be harder than I’d expected. At this time, there’s no access to the official website, so we needed to rely on third party information. The problem with this is that several different websites present several different versions of what’s it contains.

My solution was to go with a few of the most trustworthy sites I know, hope they have the best information, and inform you that this list may be at least somewhat off.

Yeah But How Much Is There?

Looking at the formula, you should be able to expect some level of help. How much however is difficult to guess because ingredient amounts are not disclosed.

This is a very common problem with male enhancement supplements sold online. It’s very difficult to find out whether or not an ingredient is present in therapeutically effective doses.

For instance, according to the Mayo Clinic, the standard recommended dose of L-Arginine for erectile dysfunction is 3 – 5 grams taken each day. I will bet anything that Epic Male Enhancement doesn’t come anywhere near that dose. If it did, they wouldn’t be hiding it, they would be screaming it from the rooftops.

L-Arginine is found in tons of both male enhancement and workout supplements, but the fact is very few of them contain enough to be clinically effective. Trust me, if Epic Male Enhancement were one of them, you’d know.

The same can probably be said right on down the line of ingredients. They’re there in the formula, but at such small levels as to be a non-factor or at least a near non-factor.

There’s not a lot to go on in this area, but there is one very rich source of customer feedback, and that brings us back to the blogger we spoke of earlier. You know the one – he got his revenge on the girl who laughed at his size, or lack thereof. At the end of his post, there are a whole bunch of Facebook comments, presumably in response to his post. 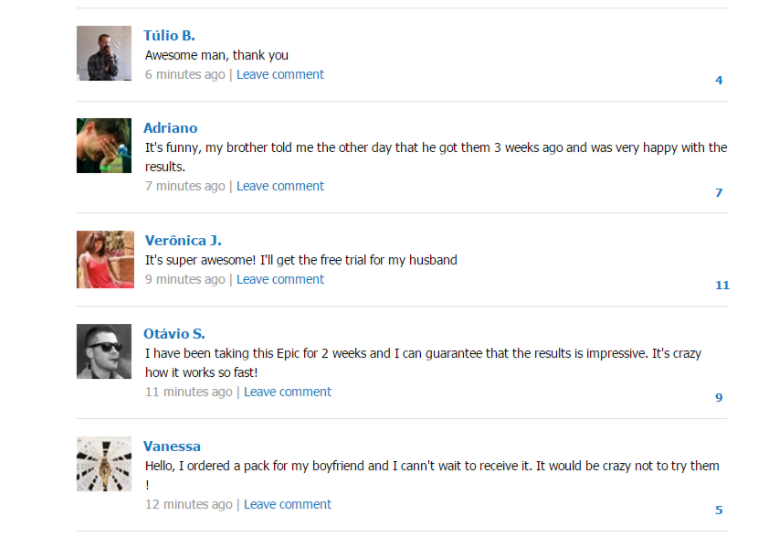 Some are thanking him for sharing, while others say they’ve tried it and it really works. But here’s the thing. They’re as fake as the original story. The whole blog post is just a ploy to get you to sign up for the free trial (which we’ll talk about very soon).

How do I know it’s a fake? I think I can explain that with one simple image: 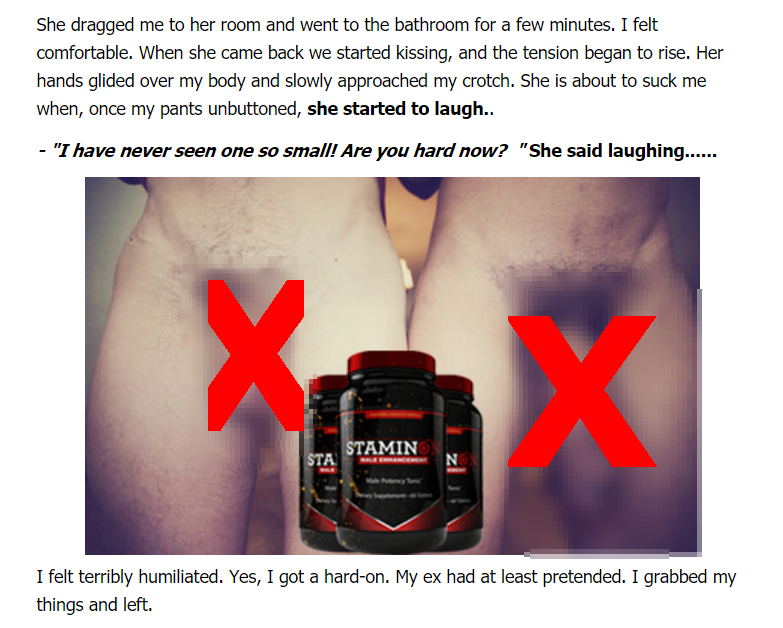 This Marcos guy’s post has been used to promote umpteen different products. He just modifies the pictures and switches out some words, and voila! He’s selling another product. And the same “Facebook” comments appear on that page as well.

If this isn’t enough to convince you this product is less than serious, just keep reading.

The only way to purchase Epic Male Enhancement is to sign up for their free trial offer. Of course, in truth, it’s anything but free.

The way it works is that you sign up and pay a small shipping fee, and they send you a full one month supply. Most customer think that’s the end of it. They’ll try it, they won’t be blown away by the results, so they figure they just won’t order more.

But what they don’t know is that by signing up, you are automatically signed up for monthly shipments and full price payments, starting in 14 days unless they cancel in time. 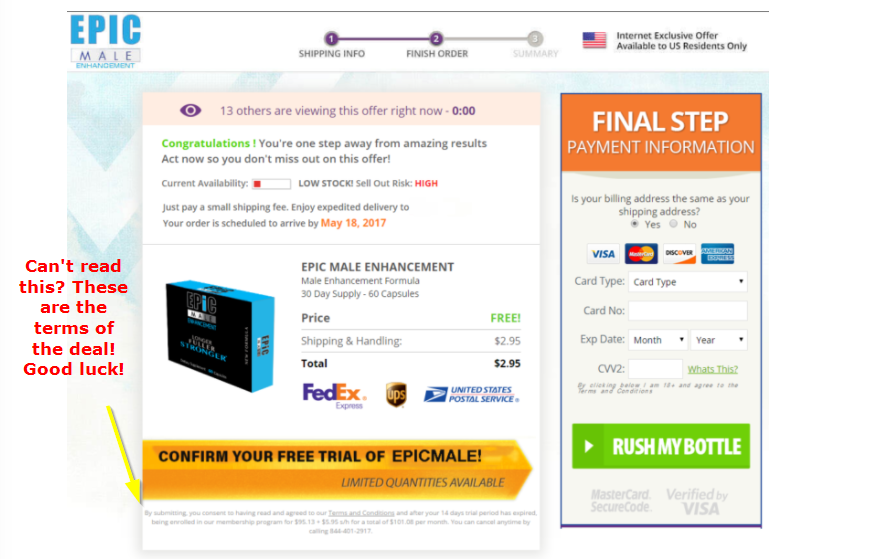 See those terms? No? You’re in good company. I get guys complaining to me about these misleading free trials all the time. The companies insist they informed you on the order form, but they are not acting in good faith. They don’t really want you to read the terms. They want you to unknowingly get locked into at least a couple months of payments, maybe more.

Here’s what it actually says:

“By submitting, you consent to having read and agreed to our Terms and Conditions and after your 14 days trial period has expired, being enrolled in our membership program for $95.13 + $5.95 shipping and handling for a total of $101.08 per month. You can cancel your Epic Male Enhancement free trial any time by calling 844-401-2917.”

If you miss that, which is easy to do, that’s a big miss!

So, with all of that, let’s recap what’s good and what’s not so good about this product.

Epic Male Enhancement – Should You Buy It?

As far as I can see, there’s nothing unique about Epic Male Enhancement and it doesn’t appear to be particularly effective either. It appears to use decent ingredients, but the chances of finding those ingredients at high enough levels to be effective are slim.

The shady advertising only serves to make it seem less legitimate as a product.

Finally, the free trial that’s actually anything but free is always a big ding in my book. Customers think they’re trying a sample. When they get a full bottle, they’re pleasantly surprised. Little do they know they’ll be paying over $100 for that bottle when it’s all said and done, and they’ll probably be forced to pay for more before they know what’s going on.

These are three pretty powerful strikes against Epic Male Enhancement. For this reason, it’s crystal clear that it does not come close to living up to its name.