If you’re a guy with ED, and you don’t want to take pills, there is another option. Erecxel, made by Male Essentials, is an adjustable penile band that you can put at the base of your penis to support bigger, harder, longer lasting erections without the use of medications or supplements. Of course, you could also use Erecxel in conjunction with supplements. That way you’ve got any libido issues covered as well. 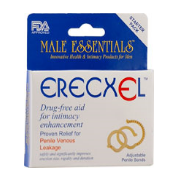 The theory on which Erecxel bands work is that they stop Penile Venous Leakage.  This is when blood that rushes into the penis during arousal, sort of rushes right back out again, leaving you without a sustainable erection.  By placing an Erecxel band at the base of your penis, it traps the blood, preventing it from flowing back out, and there you have a sustainable erection.

Erecxel is adjustable and comes in the form of a split ring with two attachable ends, making it fully adjustable.  You fit it onto the base of your penis, just above the scrotum, before you become erect.  Adjust the size and close the band.  Erecxel does not prevent the inflow of blood, only the outflow.

Erecxel bands are made of durable rubber-plastic.  They are washable, and can be used several times, some guys report using one for years.

Customer feedback for Erecxel is pretty mixed, to the point of polarized. Guys either love it or hate it. There’s no in between. Guys who are able to put it on and adjust the size correctly think Erecxel is the best thing since peanut butter and chocolate. But there are plenty of guys out there who complain that putting it on correctly is just impossible.

Erecxel is available through lots of online retailers. A package of two bands generally costs less than $15.

If sustaining an erection is problematic for you, definitely invest in Erecxel.  It’s cheap, and if you’re lucky enough to be able to get one on correctly, it could be the answer to all your problems.

Leave Your Review of Erecxel Below