At first glance, HAM may seem like strange name for a male enhancement pill.  That is until you know what it stands for.  HAM Male Enhancement stands for “Hard as a Motherf*$%er” Male Enhancement.  So, right off the bat, we’ve got to hand it to BioGenix for the in-your-face product name.  BioGenix is a supplement manufacturer responsible for a growing list of natural bodybuilding and healthy lifestyle supporting supplements, HAM Male Enhancement being one of them.  The reviews on Amazon are overwhelmingly positive, so aside from the name, this stuff is worth looking at.

There’s not a whole lot of information available, but we’ve put together what we know so you can make your best possible choice about whether or not to use HAM Male Enhancement. 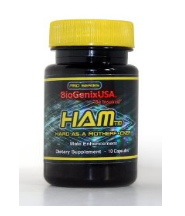 Here’s where things get a bit strange.  HAM Male Enhancement is a proprietary blend, and it’s made up of a bunch of components that are definitely not your standard male enhancement
fare.  There’s:

You can order HAM Male Enhancement from the BioGenix website.  The 10 count bottle sells for $39.95. You can also find it on Amazon, but for about $10 less.

There are a ton of HAM Male Enhancement reviews at Amazon.com, and they are almost all extremely favorable.  A typical statement is:

“ This product works great for me, I tried other products, but nothing compares to this pill’s effectiveness.”

The sheer number of reviews, however, does leave us (and a few of the Amazon reviewers themselves) questioning whether or not
they’re real.

We have to admit, we wish we could say we really liked HAM Male Enhancement with a name like “Hard as a Motherf*$%er”.  Unfortunately, the ingredients just don’t cut it and we’re not buying the reviews.

Leave Your Review of HAM Male Enhancement Below