Staminil is a male enhancement supplement that kind of stays under the radar. There’s no flashy marketing or over-the-top promises. Just a few reviews and retailers out there keeping it afloat but perhaps just barely.  Staminil information is out there.  You just have to look for it.

Staminil is mainly sold alongside another product, called Libi-Strip.  The combination is meant to provide an effective, all-natural substitute for Viagra and other prescription erectile dysfunction medications.  Taken together you’ll achieve:

The signature ingredient in Staminil is Bombyx Mori, otherwise known as the corpse of a silkworm.  This odd ingredient is thought to be a very powerful aphrodisiac. 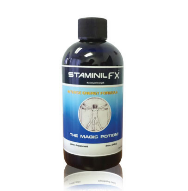 For best results, it is recommended that you take 2 capsules per day for three daysto get the ingredients into your system.  After that, take it as needed, 1 or 2 capsules before sex.

You can buy Staminil with Libi-Strip online, but only together, not separately. The combination pack which contains 20 Staminil capsules and 28 Libi-Strips sells fro $84.50.

Leave Your Review of Staminil Below