Dave Walker Date: May 2, 2014 Male Enhancement No Comments on Elexia

Elexia is a male enhancement supplement made and distributed by the Wellgenix/Heaven Sent Company.  This is a company that makes several different kinds and categories of nutritional supplements, so that lends a certain degree of credibility to all their products.

The promise of Elexia is that it will support the male sexual experience in a number of ways.  It increases libido, it supports strong and firm erections, and it improves energy and stamina.  It’s a daily supplement, and when takenregularly, it should keep the wheels of your reproductive system well greased, so it performs at peak levels when called upon. 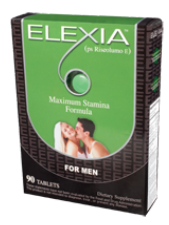 It appears as though the primary focus of Elexia is combating erectile dysfunction by increasing the amount of blood that flows to the penis during arousal.  This is the tried and true method used by most herbal male formulas.  Elexia in particular has several ingredients that work toward that end.

It is recommended that you take one capsule daily, with an additional 1 or 2 as a boost shortly before sexual activity.

You can purchase Elexia through the Heaven Sent Naturals website or several other online supplement retailers.  At the official website, a bottle costs $39.95.  Elsewhere, you’ll find it for much less.

Judging by the formula, you’ll probably get a real improvement in your erections if you use Elexia.  On the other hand, with the Yohimbe and the other health warnings, I’d recommend you pass on it in favor of something that works and is also safe.

Leave Your Review of Elexia Below!