How can I make my penis bigger? It has to be the number one question I get asked. We’ve all been conditioned to believe that it’s how big it is, not what you do with it, that matters. And if that’s true, and the average guy is 6 inches, we all want to be 7, 8, or 9 inches. We aim to please and impress, and that 6 average inches isn’t gonna cut it.

Once you decide you want your little fella to be a little less little, you have a few options. You can get surgery, but that seems pretty extreme. You can attach a stretching device to your penis under your clothes, but that seems slow, tedious, and potentially uncomfortable. Or you can take one of those pills you’ve heard about that magically makes you grow, right? That’s what Formula 41 Extreme wants you to believe.

What is Formula 41 Extreme?

Formula 41 Extreme is a male enhancement supplement sold exclusively online. Its claim is that it’s been clinically tested for increasing size, hardness, and stamina, and that by using it, you’ll be the guy she can’t forget. The product website explains in great detail how Formula 41 Extreme works and why you should use it. So let’s dive right in and figure out if this is something you should spend your hard earned time and money on.

Formula 41 Extreme makes it very clear that this stuff is all about making you bigger. Sure, they give a little lip service to the idea that your erections will be harder and you’ll last longer, but the real draw is penis enlargement. It’s made perfectly clear when the website says you’ll be the only one she wants once you drop your pants and she sees what you’re packing. 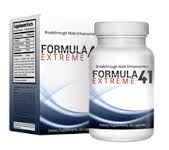 If you’re confused about whether or not and how a pill can make your penis grow, I don’t blame you. There’s conflicting information everywhere. According to the Formula 41 Extreme website’s explanation, it’s very simple. Your penis is a muscle, just like any other muscle, only different. While protein, and steroids can help you get bigger biceps, they don’t do much for your penis. In fact, steroids my actually have the opposite effect on your penis.

So Formula 41 Extreme uses a different set of chemicals to grow your penis. These chemicals work together to to create two technologies:

The Formula 41 Extreme website lists these penis stimulating ingredients as:

How to Use Formula 41 Extreme

Formula 41 Extreme is a daily supplement. The recommended dose is 2 pills taken once a day, preferably in the morning or afternoon.

There are some glowing testimonials on the Formula 41 Extreme website, but what we found more telling were some of the opinions expressed on Amazon.com:

Formula 41 Extreme talks a lot about how it’s been clinically tested. Here are some of the results they talk about, in their words:

“Formula 41 has been proven to be the best and most effective male enhancement product on the market by independent studies.”

The words “Clinically Tested” appear several times on the Formula 41 Extreme website, along with statements like these and diagrams showing similar claims. But there is not one actual reference to reports or papers that came out of these clinical tests, no real references to any actual clinical tests.

You can only purchase Formula 41 Extreme online through their website or through Amazon. At the website, one bottle costs $44.95 with discounts for buying multiples. On Amazon, you can get a bottle for $22.99.