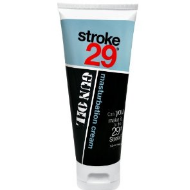 You apply a small amount to the shaft and head of the penis and begin to stroke.  As you continue to stroke, the consistency changes, but the product lasts as long as you need, and there is no need to reapply.

All the Stroke 29 ingredients are listed on the website, but how they each function is not explained.  They include:

You can buy Stroke 29 in stores and online.  CVS and Walgreens carry it, as do Amazon and the Gun Oil Website.  The 3.3 ounce tube sells for about $14.99 while the 6.7 ounce size sells fro $25.99.  These prices are pretty consistent wherever you go.

Stroke 29 is a smashing success when it comes to its stated purpose.  So if that’s what you’re looking for, you’ve found it.  But lots of guys are looking for a multipurpose cream that works as a lube for partnered as well as non-partnered sex.  They may also want something that provides a little extra excitement or stimulation for themselves and/or a partner.

Leave Your Review of Stroke 29 Below