Vaxitrol is a male enhancement supplement made by Foundation Nutraceuticals, a company that makes several sexual health and fitness type supplements.  The interesting thing about Vaxitrol is that at one time, it was recalled by the FDA.  During random testing, it was discovered to contain an undisclosed ingredient, a derivative of Sildenafil, the prescription-only ingredient found in Viagra.  But it’s back and presumably reformulated, so let’s take a look at what they’ve come up with.

Vaxitrol makes the bold claim that it’s the best selling penis enlarging and sex drive boosting pill on the market.  Among the promises it makes:

I do find it odd that they throw the penis enlargement phrase out there, but don’t follow up on it in the list of benefits. 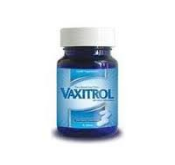 Foundation Nutraceuticals does make a point of stating that the Vaxitrol formula is 100% all natural, using ancient herbal ingredients that have been around for centuries.  There’s:

The recommended dose for Vaxitrol is a little strange.  A bottle contains 16 capsules.  Instructions say at first that you should take 2 capsules about one to two hours before sexual contact.  They go on to say that best results are achieved if you take 2 capsules on a daily basis (on an empty stomach).  Then after a week or two, you should lower your dose to one capsule per day.  So it’s had to determine if you’re supposed to take it daily or only as needed.

If you go to the Foundation Nutraceuticals, they’ll direct you to the online supplement retailers who carry it.  Generally, the 16-count bottle sells for around $30.

There are two reasons why I cannot recommend that you buy Vaxitrol.  One is that it contains Yohimbe, which while effective
may cause potentially dangerous side effects.  The other is that a $30 bottle will only last you a week.

Leave Your Review of Vaxitrol Below!