Marketing, in general but more so with supplements, can be a tricky thing. If a product is under-marketed, it can slip right under the consumer radar and – even if it is a quality product – go unappreciated for a long time. Maybe out of fear of this, many supplements companies swing to the opposite extreme and make enormous – seemingly unbelievable claims about the product. That seems to be the strategy behind C9-T11 2.0. Although, we aren’t really surprised at this since that’s exactly what the company did for the original C9-T11 which is no longer being produced.

Granted, the manufacturers have gotten a little more modest in their claims; Instead of stating that C9-T11 2.0 can help you gain 700 more muscle in just 7 weeks, they now say that you can expect a mere 600 percent gain. Clearly, we were skeptical.

Let’s take a closer look at the ingredients of the new and improved C9-T11 to see if it stands up to the hype. First, though, what exactly do they claim about this supplement? 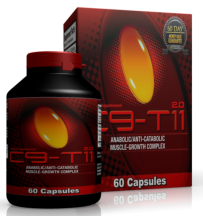 As mentioned above, the manufacturers claim that C9-T11 2.0 will produce massive increases in muscle size. But the official website – which reads like a brochure and has very little information on it’s single page – also says that will diminish your body fat while increasing your strength, energy levels and sex drive.

All of this is meant to be accomplished by suppressing cortisol – the “stress hormone.” The website correctly states that cortisol has catabolic activity, meaning that it can make your body start destroying your hard-earned muscle. Chronically elevated levels of cortisol have also been shown to cause sleep disturbances and an increase in body fat – particularly around the abdomen.

So, the idea of reducing these negative effects of cortisol sounds pretty good. But how does C9-T11 2.0 intend to get the job done?

What’s In The Bottle

We could not actually find detailed information about the ingredients of C9-T11 2.0 but the official website highlights the three active ingredients. These are:

Overall, the customer reviews that we could track down online were mixed with a lean toward the positive. Most users reported seeing improvements in their body composition within a week of starting the product. Even among those who saw no changes, people reported feeling like they had more energy.

Of course, it’s hard to say with any certainty why the supplement seems to work for some people and not others.

Despite any skepticism, we have to admit that the formula in this new C9-T11 seems promising. As stated, though, it’s hard to say that for sure without knowing the dosages used here but each of the ingredients has potential to work in the intended ways. It has to be emphasized, though, that we’re talking about potential. Much of the research used to promote this formula is weak and inclusive. It’s also a little concerning that the website so blatantly lies about the results of one of their cited references.

Then we come to price. For what it is, this supplement comes in a little pricey at $37 for a month’s supply of 60 pills. The official website does offer larger packages at discounted prices. A “money-back guarantee” is also offered, which is a nice little safety-net. The company is also very careful to note that there are no recurring charges or “automatic renewal” program. We did see the product on Amazon as well, but the price was roughly the same.

Ultimately, it looks like C9-T11 2.0 might have some potential to improve body composition with slight boosts to your athletic performance. We could see no hard evidence to support the claims of enhanced sexual performance, though. In short, even if the product does work, it will not live up to the hype.