Spartagen XT Review – Does It Work?

It is a sad fact that, as we age, men go through a process called andropause, during which testosterone levels drop. Along with this hormonal change, many men experience a decrease in energy, reduced sex drive and increase in body fat. There are many supplements on the market, however, that claim to provide a natural, safe solution to andropause. Among them is Spartagen XT, produced by Edge Bioactives.

Boasting a variety of vitamins, minerals and herbs, Spartagen XT claims that it can increase levels of free, bioavailable testosterone which would increase energy and sex drive while improving body composition. Let’s take a look at the ingredients to see if it has the potential to live up to these claims. 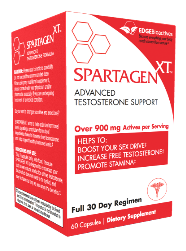 Although the official website discusses only a few of the ingredients found in Spartagen XT – which is a little strange – the label tells a slightly different story. All told, the supplement contains:

There are definitely some promising ingredients in here. Unfortunately, they are included in a proprietary blend so we have no way of knowing the exact dosages. While most of the ingredients are fairly harmless, it’s concerning to not know how much butea superba could be contained in Spartagen XT since that particular herb can have serious side effects.

There are two strange things that stand out when searching for Spartagen XT online. First, it seems to be fairly hard to find. The only merchant selling it on Amazon was sold out at the time of this writing and there were only two reviews. One was a 5-star that did not seem entirely trustworthy and the other was a 1-star that made no sense.

For the most part, though, comments on many blogs and customer reviews sites are largely positive. The primary complaint is the cost – which we’ll get to – and there were no reports of side effects. As far as the negative reviews, it is important to note that many of the ingredients in this product have not been shown to work in men with healthy testosterone levels. In fact, the manufacturer markets this product to men who are undergoing andropause.

Second, the company website is off-putting and provides no upfront information about price. Instead, the site demands that you input personal information like your name, age and reason for interest to “see if you qualify for a 51% discount.” Other sources state that a 1-month supply costs $69. While this does not necessarily mean anything, it does not create a pleasant or comfortable user experience.

All in all, the formula for this product seems promising – if the ingredients exist in suitable dosages. It is also a plus that the factory is an FDA registered facility, since many male enhancement supplements contain undisclosed prescription medications. However, the product is pretty pricey and comparable products are out there that cost much less. In the end, the cost makes us say that you might want to look