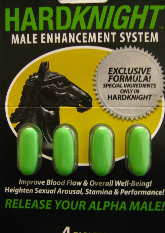 This is my second time writing this review for HardKnight, as my computer shut me out the last write up, so I may make this a little bit shorter than usual. This supplement promises alot of the same things that the others do, and even has the usual fluff on their sales page about being the best male enhancement product in the world.

The company that makes HardKnight actually makes a few other products, including a testosterone booster and a sexual aphrodisiac energy shot. I have had a few guys ask me if I have tried this supplement out yet, but unfortunately it is still on my list of products to try.

Developed by a gentleman named Christian Bovine, Hardknight is a supplement designed for men to help boost libido, increase stamina, and give you the ability to maximize your manhood. It officially works by increasing the amount of blood flow to the penis during an erection, which is what causes you to stay erect throughout the entire
process.

The company mentions that they sell HardKnight in a variety of retail outlets, including Walgreens, CVS, Walmart, and others, but I looked through a couple of those stores and could not find it at all. I think that it is probably sold locally in these stores, and I also noticed that it was available on the Walgreens official website.

The overall impression I got from their site was pretty impressive at first glance. They give a detailed account of how an erection works, and describe in pretty good detail how exactly the ingredients work in synch to give you increased orgasms. The only downside that I see is that they really don’t produce any evidence in the way of customer reviews and testimonials, something which is pretty important.

Another thing their website fails to mention is the ingredients in Hardknight. They do mention that there are 14 different ingredients, and that they all work in synch to promote a healthy sex drive. It’s also noted that Hardknight does not contain yohimbe, which is a powerful albeit dangerous herb that has been promoted in male enhancement products for the last 10 years or so.

We actually had to go to other sites to find out what they were, which from a sales perspective is not a very good thing. The official listing of ingredients are:  L-Arginine, Niacin, Ginkgo Biloba, Tribulus terrestris, Tokgkat Ali, Maca Root extract, Cniddium Monnier, Catuaba Bark, Ashwagahndo root, cinnamon bark, and zinc. Most of these ingredients are pretty important for helping to alleviate male sexual dysfunction, most notably L-arginine.

I have personally taken several supplements that contain L-Arginine, and you would be shocked at how different you can respond to it. I don’t know if it has to do with the quality of the l-Arginine, or how it interacts with certain ingredients, but sometimes it works great and sometimes it seems to not work at all.

Anyway, the way l-arginine works is it is a vasodilator,which allows for the blood flow in the penis to be increased by dilating the blood vessels and the arteries. In particular, the corpora cavernosa is targeted, which is the main artery that causes an erection during sex. Niacin is also an important ingredient, and in my opinoin is probably the main herb that should help with stamina.

This was a tough one, as there were not many reviews or testimonials of Hardknight male enhancement online. I actually received an email from a gentlemen who has been using it for a week, which is what sparked this review. This is what he had to say:

“I have been trying hard night for 1 week…and have not had any significant result. I do not see any difference with hard night. I have been taking (sic) me 36 with better results.”Anonymous email review we received

Too hard to tell whether or not Hard Knight actually does work. While the ingredients listed are proven all natural aphrodisiacs, we are unsure of the quality and the potency because we have not had a chance to test it out yet. Judging by the fact that there are no other reviews online, it’s hard for us to recommend something if it hasn’t been recommended by others yet.  Stay tuned to find out more updates as we get a chance to official test out Hardknight.

Leave Your Review of Hardknight Male Enhancement Below