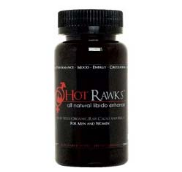 Normally when you think of organic super foods you don’t think of male enhancement, but there is actually a company that is doing that right now. The name of the herbal supplement is Hot Rawks, and it has been receiving some considerable attention on the international adult films scene, as well as international press. Founded by an ex hooters waitress and endorsed by male adult film stars, I was actually approached by the company recently to help sell their product and help to promote their brand. I’m really not that interested (and I told them so), but the idea of an organic male enhancement product intrigued me.

What is Hot Rawks?

Labeling itself as the worlds only healthy libido enhancer for men and women, Hot Rawks is an organic male and female enhancer that used nothing but natural and organic ingredients. Founded by an ex hooters waitress named Julie Wilson, a single mother in her mid thirties originally from West Virginia. Apparently she came up with the idea of Hot Rawks through a passion of cooking organic health foods, and realizing that sex really does sell.

As mentioned earlier, the supplement is made from all natural ingredients, which include organic versions of Tribulus Terrestris, Korean Ginseng, Catuaba Bark, Epimedium, Cayenne Powder, Maca, and Cacao. For those of you that are not completely sure what organic really is, it basically means that these ingredients were not treated with any pesticides, herbicide’s, or synthetic chemicals while they were growing.

Most proponents of organic foods argue that using and eating organic foods is a healthier option, but the argument is mainly anecdotal and has not been proven in a clinical setting.

The fact that Hot Rawks uses all natural and organic ingredients is actually alot more important than you think. Unlike ingredients for products that are grown in may other countries, organic ingredients are heavily regulated, and must pass strict standards to be sold as such. The only thing we have a problem with is the fact that the manufacturers said that it does not cause any side effects.

There are numerous side effects that are associated with some of the ingredients in Hot Rawks, including Tribulus. Tribulus Terrestris may make prostate conditions such as BPH worse, by leading to a increased prostate weight. It may also interact with diabetes medications, causing an unsafe drop in blood sugar levels. (1)

Where To Buy Hot Rawks

Hot Rawks can be purchased on Amazon, their official website Hotrawks.com, and a handful of stores in a handful of states nationwide. The official retailer offers both a basic order package, as well as an auto-ship program. A one month supply (6o capsules), costs $39.95, and it is backed by a 30 day guarantee. The money back guarantee does include the fact that you need to send back the unused merchandise, and that shipping costs are not covered.

As of this review, Hot Rawks is not available in any major chains, but there is talk about them showing up in stores such as Walmart, Walgreen’s, CVS, and a few others in the future. There also does not appear to be any coupon codes for the supplement, but they do offer discounts for bulk purchases.

It also does not appear to be sold overseas in countries such as Australia, New Zealand, and the UK, however it is available for sale in Canada, Puerto Rico, and the US Virgin Islands.

I have never been a HUGE fan of organic products, mainly because I think it is an industry built on very little scientific proof. However, that being said I do think that you are getting a very good quality product when ordering Hot Rawks, and this company really seems to give a damn about their reputation. The fact that it contains tribulus terrestris and ginseng is a testament to a product that probably really does work.

Leave Your Review of Hot Rawks Below