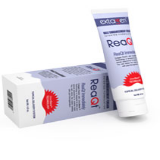 ReaQt is a topical male enhancement cream that has recently been featured in several leading mens publications, including Maxim, Playboy, and Mens Fitness magazine. It is not the first of it’s kind, and we have even used several of this enlargement creams in the past, mostly with no success. The official site of ReaQt poses the question “What Do Women Really Want?”, and the staggering majority said better sex over good looks, money, and muscles. While I don’t truly believe that is true, it is undoubtedly one of the top things on most women’s lists. Let’s see if this cream really lives up to the claims.

ReaQt (pronounced Re-act) is a daily topical cream which supposedly works instantly to enhance size, maximize pleasure, and increase your confidence. Unlike a pill which needs to be ingested as much as 2 hours before sex, you can apply the ReaQt cream and within minutes you should start to see results.

It looks like the company behind this product, J3 Labs, also makes a product called Extagen, which also says it will improve your sex life and size. As a matter of fact, they used to offer a complimentary bottle of ReaQt when you ordered a certain amount of Extagen, but that no longer seems to be the case.

Apparently this has also been “seen on TV”, but I searched everywhere and could not find an infomercial on this product. Thankfully, this product is made in the US, so they probably don’t dump any harmful ingredients in their formulation.

Saw Palmetto Extract – This particular extract has been feverishly promoted by many companies to help treat BPH (benign prostatic hyperplasia) for years, but recent clinical studies have suggested that their is no real tangible proof that it works for this reason.

L-Arginine – One of the most popular ingredients in practically all male enhancement pills, L-Arginine uses a process called Nitric Oxide production to essentially widen the blood vessels and allow increased blood flow. While this is true, there is no conclusive evidence that they will widen the vessels so much that they will essentially grow your member to any substantial size. But alot of companies will try to sell you that story though!

Where To Buy / Best Price

ReaQt is only sold on the official website, and the price comes it at a staggering $66.90 (after shipping charges). This easily makes it one of the most expensive male enhancement creams we have ever come across. Luckily, they provide a 120 “iron clad” money back guarantee, which is nice to know that they back their product 100%.

The biggest problem with creams such as ReaQt is the delivery system. Unlike pills, the ingredients listed above are supposed to be absorbed in the bloodstream directly, which is supposed to cause a quicker reaction. However, the issue is that, in general, the male sexual organ is not a very good mechanism to absorb the ingredients. You will easily get better results when using a pill, or in some cases, an extender device will work even faster.

Because most guys can’t discern truth from reality when it comes to these claims, companies like ReaQt get away with telling everyone that you will gain size with there product. Trust me, if there were a cream that did just that you would know about it! At best, this cream may provide some more stimulation during sex, and even act as a nice, albeit expensive, lubricant. I mean, they even mention this at the bottom of their website stating that “Results expressed in user testimonials should be considered extreme and are not typical. Generally expected results for most users would be better feeling erections.” That right there says it all.

Leave Your Review of ReaQt Below