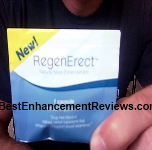 It’s rare that we come across a male enhancement product that is distributed by a network marketing company, but Regenerect is one of those products. Manufactured by a company called Regeneca, we have had the opportunity to try out a sample of this product after a whole host of problems trying to order it. It’s a long, drawn out story, but we will attempt to explain the problems we had when trying to order Regenerect, and our results from using it. Since this company is relatively new to the scene, we decided to give them a little leeway, but wanted to report our issues with this product in this review.

Regenerect is a drug-free blend of natural, herbal ingredients that enhance and support sexual experience. It is manufactured by Regeneca International, which is a publicly traded company located in Irvine, California. This all natural health and wellness company currently only has 2 products, the other of which is called Regeneslim, an appetite control dietary supplement.

Regenerect is designed to act as an alternative approach to treating erectile dysfunction, and is designed to be taken once a day, with one tablet one hour before sexual activity.

The ingredient list in Regenerect is long and distinguished, but encompasses many of the more popular all natural aphrodisiacs you will find. Topping the list is the main ingredient L-Arginine, which supposedly acts as a Vasodilator, contracting the smooth muscle around artery walls to allow for increased blood flow. The other ingredients in Regenerect include: Epimedium extract, Silkworm extract, Maca Root, Green Tea, Willow Bark, Spanish Red Oak Leaf, and Red Saffron.

There are also a number of other fillers used for product freshness, including silicon dioxide and magnesium stearate. Potential users are encourage to consult with their physician prior to using Regenerect to be sure they will not get any side effects from any of these ingredients.

When Regenerect first came to market, it actually contained an ingredient called Sulfoaildenafil,which is an analogue of the drug Sildenafil. This is the same prescription ingredient found in Viagra, and other pharmaceutical drugs. Since this particular ingredient can lower blood pressure to dangerously low levels, and the company did not disclose that it contained Sulfoaildenafil, the FDA issued a bad of all Regenerect products on April 28, 2011, and forced the company to recall all of their products. The product we are discussing throughout this article has to do with the updated version of Regenerect, which does not contain Sulfoaildenafil.

My Experience with their Customer Support Team

To be clear up front, I did receive a free sample of Regenerect from the manufacturers, but that was after a very big set of problems. To start, I originally went to google to find a couple of free male enhancement samples to order, and Regenerect was actually one of the top ones. I put in my information, which included a credit card for shipping, and dutifully waited for my order. Well, about a week passed and I still did not receive anything, so I decided to write their customer service and ask what’s up.

When they got back to me (I won’t name names) they said that there was a screw up in the warehouse, and that they would get back to me once they had more product in stock. After a couple of days, I logged into my Bank of America credit card account, and was shocked to learn that not only was I charged $8 for the trial order (which I expected) but I was also charged $97.60 for another order of the product! Keep in mind that I have tried alot of so called “samples” of male enhancement products, such as nitroblast x and mojo magnum, and they are not so free. They usually have some stipulation where you need to cancel your order within 2 weeks before they start charging you fistfulls of money and keep sending you the product.

Flabbergasted, I decided to contact the company and tell them that I never received my free trial sample of Regenerect, and that I would like to cancel all orders with them and get a full refund for everything. I will say this, they did get back to me very promptly, and even offered me this sample completely free, so I decided to take them up on it.

I believe that the company itself is simply experiencing growing pains, and the truth of the matter is they have a decent quality product in my opinion. They need to do a better job of keeping track of their orders, and making sure things like this don’t happen more often. I am still waiting for the company to completely refund my money, and will update this as soon as that happens.

Our Results From Taking Regenerect

We had a chance to officially try out Regeneca to see how well it worked as an erectile dysfunction treatment. As discussed above, we have tried many different male enhancement products that contain many of the same ingredients as Regeneca, including L-Arginine, Epimedium, and Maca Root Extract.

I took the one pill, as directed, on an empty stomach in the morning, one hourbefore sexual activity. As with alot of these pills, some seem to work after an hour, some work in as little as 20 minutes, and some take literally 24 hours to kick in. Regenerect was different from many other male enhancement supplements because it actually took about 6 hours for me to start feeling the effects from it. I did feel some keen side effects from it, most notably a headache and loss of appetite. I’m not sure if it can be directly attributed the Regenerect, but I had not experienced the same feelings the day before or after.

I did notice that Regenerect provided a fairly decent erection quality, and I was able to perform above my normal expectations. That being said, I am a 30 year old male, and the side effects I had would lead me to believe that any males in their early 50’s and above consult with their doctor before taking this pill. Like alot of other network marketing products, there is alot of hype surrounding how well the product works, but there are very few “real” reviews from customers that have actually tried it.

Leave Your Review of Regenerect Below