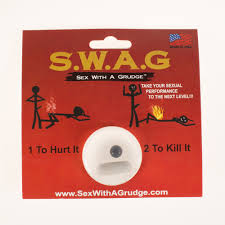 Is it me, or is advertising getting more “in your face” than used to be? Man, I’m no prude, but some of these male enhancement product websites are coming on stronger than ever. Take SWAG Male Enhancement. Their catchy little jingle: “1 To Hurt It. 2 To Kill It.” That’s what it says on the package, and the website phrasing follows a similar track.

But since we’re more concerned with results than tough talk, we’re just going to breeze right by the tagline and get down the business of analyzing SWAG Male Enhancement to see if it works.

1. What Is SWAG Male Enhancement

SWAG is an acronym for Sex With A Grudge.” They don’t mess around with telling you it’ll make your penis bigger. This stuff is all about performance., and being ready when opportunity strikes. The home page of the website is basically just a long narrative about a guy who finally gets his chance to hook up with a girl he’s had his eye on.

The story sets the scene where the guy is so nervous about finally getting his chance that he’s worried his nerves won’t let him perform. They don’t actually get into the part about how he takes SWAG Male Enhancement, and all is well, but that’ the implication.

So in a nutshell, SWAG Male Enhancement is a performance enhancement supplement that gives you the physiology and the confidence you need, so you don’t have to be that guy, wondering if he’ll be able to get it up, keep it up, and have her begging for more.

The listed ingredients include:

With a little looking, we found that this is the exact same ingredient list found in several other male enhancement formulas, usually ones that reference Black Ants in their names.

You’d be surprised how many “herbal” supplements actually have prescription ingredients like this in them. The FDA finds some of them when it conducts random lab analyses, but they don’t catch them all. You may think, “Cool, I can get Viagra without having to go through the hassle and embarrassment of going to the doctor and asking for a prescription.” But you’d be missing half of the story.

The reason you need a prescription to use Sildenafil is that for some people, it can be extremely dangerous, to the point of causing death. If you take nitrates for a heart condition, taking Sildenafil could be fatal. If you take blood pressure medication, taking it could also be dangerous. Making sure you visit a doctor to determine if you’re a good candidate before just going out and taking Sildenafil could save your life.

The FDA recommends that people don’t use SWAG Male Enhancement because of its findings.

In spite of the FDA’s warning, SWAG Male Enhancement is still available through its official website and in some retail stores. I’m not sure how they get away with this. It’s possible that they’ve reworked the formula to comply with regulations, but there’s no mention of it at all at the website.

A one dose trial package costs $10.99, and you can get 24 doses for $175. It comes packaged in single dose packets designed to sell on counter tops in gas stations and convenience stores. So I wouldn’t be surprised if you come across it there.

SWAG Male Enhancement used to be available on Amazon.com, but it looks like they pulled it after the FDA warning letter came out.

5. How to Use SWAG Male Enhancement

The fact that it’s sold in single dose packages indicates that SWAG Male Enhancement is an as-needed supplement, meaning you take it only when you plan to have sex, about 45 minutes to an hour before. But the website FAQs tell a different story. They say sometimes you should take 2 doses at once, if you’re expecting a big night. It’s also recommended that you take a daily dose because it will put you in a good mood, even if you’re not planning to have sex.

I get that it may be tempting to try SWAG Male Enhancement in the hope that you’ll get Viagra results without a prescription. But the argument against it is compelling. You really can’t trust that this company has your best interest at heart. Even if they have changed the formula, they tried to get away with putting a dangerous ingredient in their supplement. If you want to try Viagra, see your doctor. You don’t know what’s in this pill or how much. SWAG Male Enhancement isn’t the way to go.