Testosterone is the quintessential male hormone. It’s what gives men their lean physique, their strength, endurance, and even their sex drive. However, production of testosterone actually peaks before you’re even 25 years old, which means that as you get older, your body is going to be producing less and less of it, which means that you’re going to have a tougher and tougher time building muscle and even keeping it.

You’ll also find that your sex drive will begin to diminish over time as well. Guys don’t want to talk about that, I know, but it’s something that every single one of us will need to face at some point in our life. Which is why there are so many testosterone boosting supplements on the market and TestoMax200 is one of them. 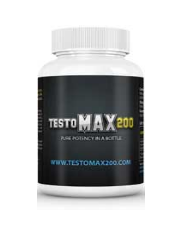 One of the first things that I noticed when I came across TestoMax200 was that it promised a lot of incredibly awesome results for a guy like me. I’ve passed that 25 year old mark and am staring down the barrel of my thirties, then forties, and the rest of my life. So I was immediately drawn in by the claims that I would be able to enjoy a boost in my sex drive, better, harder, and longer lasting erections, and even a boost in energy level.

Lower testosterone levels can even affect your mood (which I didn’t know until I began to learn more about it) and to think that I might be in a better mood as a result of this supplement was more than enough for me to give it a try.

The key ingredients that are found in TestoMax200 are Tongkat Ali, Gingko Biloba, and Ginger. The basic notion behind these ingredients is that Tongkat Ali is supposed to increase the levels of free testosterone in the body (the good stuff) and the other main ingredients (especially the gingko Biloba) are some kind of aphrodisiac.

TestoMax200 rides high on a claim that these supplements are ‘all natural.’ In truth, the more research I’ve done on testosterone boosters is that most of them (at least most of those that are over the counter) are considered ‘all natural.’

The problem with that is just because they’re all natural, it doesn’t mean that the dosages that they contain are going to be good for you, or that they’re going to do much of anything for you.

There are no clinical studies out right now that study TestoMax200. So there’s no way to look at research and know that you’re going to be getting some high quality results here. That’s a bit disappointing, to be honest here. However, that doesn’t stop me, as long as I know the ingredients are safe, I’m going to give it a try.

Where Can I Buy It?

The official website sells Testomax200 for the low low price of $69.95, which is not very cheap when stacked up to comparative testosterone boosters.  One of the main problems I have is that the company who makes it (Natural Breakthroughs Research) is not even based in the US.  Rather, they are located in Switzerland.

This might not sound like a big deal, but one of the main issues with this is that they can make any claim they want and not be held accountable here in the US.

Another issue we have is the billing procedure Testomax200 uses.  The price quoted above ($69.95) enrolls you into what’s called an auto rebill, auto shipment program, which essentially means that they will continually send you the product on a monthly basis, as well as charge you the $69.95 every month.

Alot of guys miss this when they are ordering, and don’t realize they are getting charged for several months until they check their credit card statements.  They do offer a 90 day money back guarantee, but as you’ll see from some of the complaints they don’t appear to honor it very frequently.

The only other place I found it for sale was on Ebay for the same price listed above, which leads me to believe this might just be someone who has some extra bottles he wasn’t expecting to get.

I took TestoMax200 for more than two months and to be honest, I did notice a mild change in my mood and I thought that my sex drive was a bit higher, but my girlfriend said otherwise. I didn’t get the kind of muscle mass boost or energy boost that I had been expecting from TestoMax200.

Even while I was taking this supplement, I was trying to learn more about it and the ingredients it uses. In truth, Gingko Biloba is supposed to provide you with extra energy, but that doesn’t mean you’re going to get better erections, better sex drive, or even better workouts.

It was a disappointment, to say the least. I had hoped for something better, but once I had given it a fair shake, it was onto the next one and hopefully something better (actually, I can’t imagine many supplements being as disappointing as this one).

With so many other products out there to choose from, I would recommend you shy away from this one.  It’s not just that the product won’t work for everyone, nobody can conclusively come to that conclusion.

It’s just that the combination of negative reviews of Testomax200 on other sites, my own personal results, and the “scammy” type of marketing / lack of following up on their guarantee’s they use doesn’t lead me to say this is a testosterone booster worth trying.

Check Out My Top Choice For Testosterone Boosters