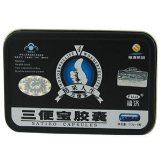 There’s an old saying that is kind of cliche, but still holds true even when it comes to male enhancement products, and that is “if it’s too good to be true, it probably is”. We heard alot of good things about Satibo, and were excited to check it out ourselves until we learned some information that might change your mind if you were considering taking it. Currently banned in several countries including Australia and Canada, getting your hands on Satibo may also prove to be a difficult endeavor. Read more in our official review below.

Labeled as a all natural sexual enhancement product by the manufacturer, that reportedly works quicker, longer, and is safe to take. Why is it safe? Well, they claim that pharmaceutical products, which have been tested in a clinical setting, often have unwanted side effects associated with them. They are completely true in their assertion that this is the case, and that’s why they supposedly inject nothing but all natural ingredients in their product.

So what seems to be the problem then? Well, we learned after some exhaustive research, that Satibo actually contains sizeable quantities of the drug Tadalafil in them, which is the exact same ingredient that is used in those so called “dangerous male enhancement pills“.

The Australian agency that tested out Satibo and confirmed these findings, and actually pointed out that this product has subsequently been banned for sale in Australia. Since it is sold primarily online, however, it is often very difficult to police these companies, because many times they deliberately try to hide what is in the package when they ship it.

And what’s worse is that this ingredient in Satibo has been known to cause a laundry list of side effects ranging from ringing in the ears (tinnitus) to headaches.  Of course, the company that makes Satibo claims that it is completely side effect free, and it generally should be if it just contained the all natural ingredients it said it did.

This is nothing new for many Asian suppliers of male enhancement supplements, and we have actually posted a full article warning of the dangers of ordering from them, which you can read here.  We have also found many other products that have been caught doing the exact same thing, such as Man Up Now and Stiff Nights.

So What Exactly is In Satibo?

Well, according to the official website, the Satibo formula includes ingredients such as Chinese Yam, Wolfberry, licorice root, jobs tears, gorgon fruit, and lily. Its supposed to start working quickly, so you don’t have to take it everyday in order to get the best results.

What was really interesting to note was that the primary website for this product, satibo.net, is actually for sale, which has us scratching out heads. Ordering Satibo also proves to be very difficult, however, it is sold in Amazon.com for about $10.

It looks like Satibo is actually a very popular product throughout Southeast Asia, where the laws are much more relaxed when it comes to selling counterfeit products such as this. There are many suppliers throughout the region that sell large quantities of the pills to distributors, who in turn promote it to shop keepers in their area.

I would not trust Satibo one bit. The fact that they were caught putting illegal substances into their product should be enough to deter you from ordering it. If that’s not enough though, the availability of the product in most countries, including the US, Canada, and Australia, makes it pretty difficult to even order it. If you want to take a pharmaceutical type medication, then we recommend you visit your doctor and get a valid prescription. If you want to see an effective all natural male enhancement pillthat really works, then check out our top choices.

Leave Your Review of Satibo Below