You just can’t overstate the importance of testosterone to a healthy male body.  And the simple fact is that the older we get, the less our bodies produce.  This is normal and natural.  But it also sucks if you want to keep and build your lean muscle mass, maintain your beer-belly free body, and keep getting raging hard ons well into your seventies.

Tribestan is a daily herbal supplement you take to combat the problem of declining testosterone.  It’s primarily geared toward bodybuilders looking for a safe and legal way to get the edge that added testosterone gives you, but the side benefit of better erections is not lost on anybody. 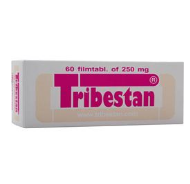 There is only one active ingredient in Tribestan, and that’s Tribulus Terrestris.  But according to the manufacturer, Sopharma, this is not just any Tribulus Terrestris.  First of all, it’s Bulgarian, which everyone in the business knows is the best you can buy.  It’s something about the fertilizer they use to grow it that makes it come up with way more active compounds than any other. But Sopharma claims that the extraction process they use makes Tribestan 50 times more concentrated than plain old Tribulus in bulk form.

Tribestan (and Tribulus Terrestris in general) tells the pituitary gland to secrete more Luteinizing Hormone.  The luteinizing hormone then signals the testes to produce more testosterone.  It’s as simple as that.  And the theory is that with the increased concentration of Tribulus in Tribestan, this will occur at a greater rate.

The recommended dose is 1 to 2 Tribestan tablets taken 3 times daily with food.

Like a mentioned, Tribestan is mainly directed toward bodybuilders.  We went to the forums to see what guys think of this stuff.  Opinions are really all over the place. Guys who believe in Tribulus seem to love Tribestan and think it’s the best.  Other guys don’t think Tribulus does much anyway, so they don’t have any love for Tribestan.

I guess this is a personal call.  The supplement world has largely moved on from Tribulus as being the hottest thing in testosterone boosters.  It’s still valued in a supporting role, but not so much as a single ingredient supplement.  Add that to the high price, and I really can’t give Tribestan my highest recommendation.

Check Out Our Top Choice in Testosterone Boosters

Leave Your Review of Tribestan Below